QUEEN CREEK, Ariz.–The QCHS girls badminton team starts its inaugural season in 6A on Thursday and will do it with the biggest group of athletes its had since the team’s inception in 2009. 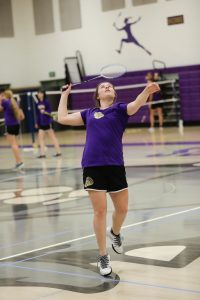 Last year, the Dogs finished with a winning record of 8-7, making it their third year in a row with at least eight team wins. The team also had doubles and singles representation at state. Senior returner Madi Duyck made it to the second round of the tournament and hopes to return and go further this year. She will be joined by fellow retuners and seniors Alexandra Corridan, Rebecca Davidsen and Olivia Cox.

“I am excited to see how Madi Duyck does in her senior year,” said head coach Jason Rhone. “The last few years she has made a deep run in the state playoffs.  I am excited to see how all of the seniors look in their last year of playing. They have truly helped the program grow by how they play and represent the team. It has been a huge help in getting other kids out to play.”

The Bulldogs will also return juniors Brooklyn Belnap and Kaitlyn Aeppli and sophomore Kaylee Shellenberger from last year’s team. Shellenberger partnered Corridan last year in doubles and the two of them qualified for the state tournament together.

Qualifying for state this year will be different as badminton is one of the many QCHS teams who was moved up to the highest division in the state this year, to 6A.

“We are playing in a new division and region so we just hope we have the same success we have had the last few years,” said Rhone. “It is going to be a lot harder playing in 6A, but I think the girls are ready for the new challenge.”

Rhone is confident in his 10th year coaching badminton at QCHS that the sport will continue to grow. Each year there are more and more returning athletes who can help teach and guide those younger players who have never played the sport before.

“The season is young and for half the team this is a brand new experience,” said Rhone. “If they are willing to put the time in for practice they have a chance to train their skills and become better. The seniors that have played will also help to create a culture to encourage younger athletes to be better than the day before. I hope the younger kids learn and accept that challenge as we continue to grow as a program.”

The team’s first match is Thursday at home vs. Basha at 4 p.m.