QUEEN CREEK, Ariz.—The Queen Creek High School girls volleyball team is coming off of its most successful season in school history and is looking to take that momentum into a new season in 6A. 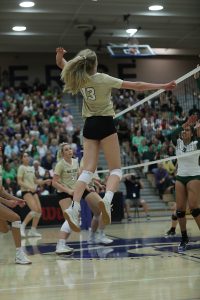 The Dogs finished the 2017 season 27-16 and were 8-0 in section play. They entered the 5A state tournament as the no. 5 seed and after an easy win in round one, upset no. 4 Notre Dame in five sets. They went on to defeat the no. 1 seed Chaparral in three sets in the semifinal and made it to the team’s first state championship game in school history.

Although the Bulldogs went on to lose in the state championship match against Sunnyslope, they came away with the school’s first runner-up trophy in girls volleyball.

The team graduated three starters from that runner-up roster, but still have the experience they will need to compete in 6A this year.

“Being in 6A means bigger teams and bigger competition,” said head coach Erica Crismon. “We have a team goal to compete every night, no matter the opponent. Our [ultimate] goal is to make it to the second round of playoffs.”

Returning starters and senior Kate Grimmer and junior Jaelyn Hodge will lead the way for the Dogs. Both are committed to DI volleyball programs and are considered some of the best players in the state. They each led the team last year in kills with 349 and 385, respectively.

Grimmer will add setting to her repertoire this year as the team will run a 6-2 offense.

“Kate is new to setting, but she’s doing awesome so far,” said Crismon. “Jaelyn is an offensive beast, but she’s also gotten more solid on defense and has more consistent serve receive.”

Middle blocker Savannah Bloom is also returning from last year’s starting roster and will be a huge asset to the team once again. Bloom led the team in blocks in 2017 with 65, and was an offensive threat from the middle.

“Savannah has worked really hard in her club season and is looking really strong so far this year,” said Crismon. “Her offense and her block will help us tremendously in this 6A division.”

While facing a more difficult schedule this season, the team has struggled with its serve receive. However, Crismon is confident that their blocking and offense will help them compete in the highest division in the state.

Sophomore Jada Wilson gained a lot of experience in the middle last year at the varsity level and will return to be a big defensive leader at the net. Senior Ally Trader will provide good passing and hitting to the team, while junior Skylar Uphoff and sophomore Klair Grimmer will also find ways to contribute. Sophomore Jaden Drollinger will step in as the other half of the setting combination for the team.

The Bulldogs start their season and 6A debut Tuesday at home against Shadow Ridge High School. The varsity match will start at 6 p.m. The freshman team will play at 4 p.m. and the JV at 5.