Bulldogs Official Sponsor
QUEEN CREEK, Ariz.–The Queen Creek High School football team is ready to start a new season and looks to be competitive once again in 6A.
In just their second year in 6A, the Bulldogs are facing a significant amount of change. Former head coach Travis Schureman has stepped down and Joe Germaine has returned to the head coaching position for Queen Creek. Schureman will remain as an assistant coach. The Dogs also have a number of players starting at new positions this year.
“Our weakness is our inexperience at certain positions,” said Germaine. “But our strength this season lies with the type of character our players perform with. We have the type of players who play with relentless effort.” 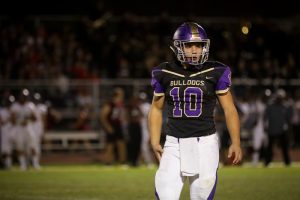 With their success over the last nine years under Germaine and Schureman, QCHS football has come to show the Arizona high school football landscape its relentlessness. Of those nine seasons, seven were 10+ win seasons and all of them resulted in playoff berths. The Bulldogs secured their first state championship in 2012 and earned runner-up accolades the following year.
Last year was the team’s inaugural 6A season and most everyone anticipated a competitive season. The year ended in a 7-4 record, but seemed to be better than the record would suggest. The team’s first loss came against the eventual state champions Chandler, who would win that title for a consecutive third year, in a game that stayed close until the fourth quarter. The Dogs won out the rest of the season and then lost close games to section opponents Highland and Desert Vista, who both ranked in the top 10 in 6A.
QC still ended the season ranked in the top 8 and received home-field advantage in the first round of the state playoffs. Despite key, season-ending injuries to the Dog’s starting quarterback and other critical players, the Bulldogs fought hard, falling just short, 37-34.
“Last season was our first season in 6A,” said Germaine. “It’s a tough challenge each week playing against the best opponents, but we are excited to be at this level. This team will strive to perform to the best of their abilities each play of each game.”
The Dogs will have another tough schedule this year, playing the returning state champions Chandler in their second game of the season. Ranked 6th in a 6A preseason poll, QC will also play Desert Vista and Highland, who are ranked 4th and 10th on that list, respectively. QC lost to all three of these teams last season, and hopes to be better prepared to face them this year.
Queen Creek returns a number of notable players, including senior running back Jace Bond, junior defensive end Isaia Glass and junior linebacker Trey Reynolds.
“With our inexperience, we will need many players to emerge,” said Germaine. “A few of these players include Trey Reynolds, Isaia Glass and Jace Bond.”
Bond rushed for over 600 yards last season and had almost 400 receiving yards. Queen Creek has always been known for its running game and will need Bond to inspire the younger players to step it up this season.
Glass and Reynolds combined for almost 100 tackles and each put a lot of pressure on opposing quarterbacks.
The Queen Creek High School football team will start its season today 7 p.m. at Westwood. It’s home opener will be next week against Chandler. Follow our social media pages for updates and final results from tonight’s season opener.
Bulldogs Official Sponsor