QUEEN CREEK, Ariz.—The Queen Creek High School girls volleyball team is back and ready to take on 6A in its second year in the state’s highest conference. 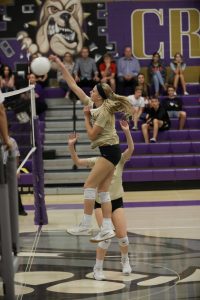 Just one year after making it to the team’s first state championship in school history, the Bulldogs were thrown for a loop, being sent to 6A for a two-year trial. In their first year, the team finished 9-8 and was ranked no. 9 at the end of the regular season. They upset the no. 8 team, Sandra Day O’Connor, in a five-set thriller in the first round to advance to the state quarterfinals.

Head coach Erica Crismon is confident the team this year has the ability to compete again in 6A.

“6A is tough for volleyball and almost every match is a knock-down, drag-out fight against a really good team,” said Crismon. “We want to win the matches that we should, play tough against the top teams and compete with them and make it to the tournament.”

QC will have to rely on its strengths and continue to improve if it wants to make another run in the state playoffs this year.

“We are a really tough serving team this year, which has helped us to get our opponents out of system,” said Crismon. “I think we also do a pretty good job passing and we really gel well as a team and get along with each other.”

Despite the positive team chemistry, Crismon believes they still need to find a system that works best for them defensively. 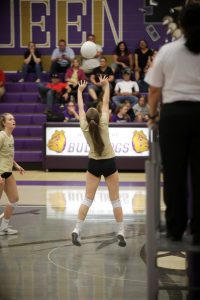 The Bulldogs are returning some key players from last year, including the two team captains, senior Savannah Bloom and junior Klair Grimmer.

Bloom was a starter on the state runner-up team as a sophomore and has played both middle and right side. Last year, she had 100 kills and led the team with 63 blocks. Grimmer is returning from playing middle last year, but has moved around the court this year.

This year’s team also welcomes junior transfer Kylee Brinkerhoff to the roster, who has already made an impact, and returns junior Jada Wilson, who Crismon is confident will be a big contributor throughout the season.

Junior Jaden Drollinger comes back as the team’s starting setter. Last year she had a team-leading 37 aces and averaged nine assists per set, with 620 total during the season.

The Bulldogs have a few preseason games under their belt and will play in a prestigious tournament this weekend at the Durango Classic presented by Nike in Las Vegas. They will play a number of teams across the country. Later on, they will also play in the Nike Tournament of Champions in Phoenix.

The Dogs will return home and play in their first region game on Tues., Sept. 24 against Mountain Pointe at 6 p.m