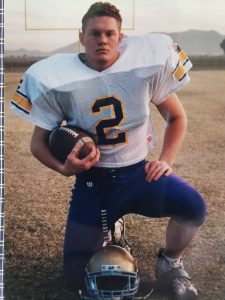 Alan, who graduated from Queen Creek High School in 2000, passed away in August. He was an active participant during his time as a Bulldog, playing multiple sports and participating in both student council and 4H. Alan played football, basketball, baseball, golf and ran track at QCHS. He especially loved football and helped lead Queen Creek to its first state championship game appearance. During his senior year, Alan was student body president and was voted prom king.
Alan’s siblings-Rachelle, Nicole, Jensen and Lyndee-all attended Queen Creek High School and kept Alan’s athletic legacy alive. Jensen continues to support the Bulldog football team today and can be found at every game during the season. 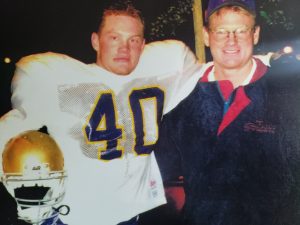 Alan’s father, Monte Nevitt, was a stalwart supporter of QCHS in its earlier years, serving on the school board and volunteering countless hours to the school. The athletic weight room is named in his honor as the Monte Nevitt Field House.
Alan “was a fierce competitor on the field, but he was a kind and protective brother at home. He was a generous and tender-hearted brother, son and grandson. Alan was a loyal friend, and a playful uncle to his beloved niece and nephews. He will be remembered for his infectious smile, his quiet acts of service and for his fun-loving bigger-than-life personality.” 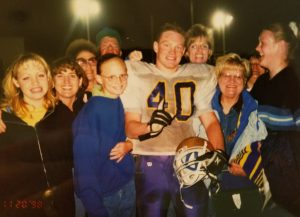 We are humbled to welcome his family to the high school today to remember Alan and his great accomplishments as a QCHS Bulldog and as a son, brother and friend.
Bulldogs Official Sponsor