The Pumas struck first on their home field, punching in a three-yard rushing touchdown to take the 7-0 lead about five minutes into the first quarter. 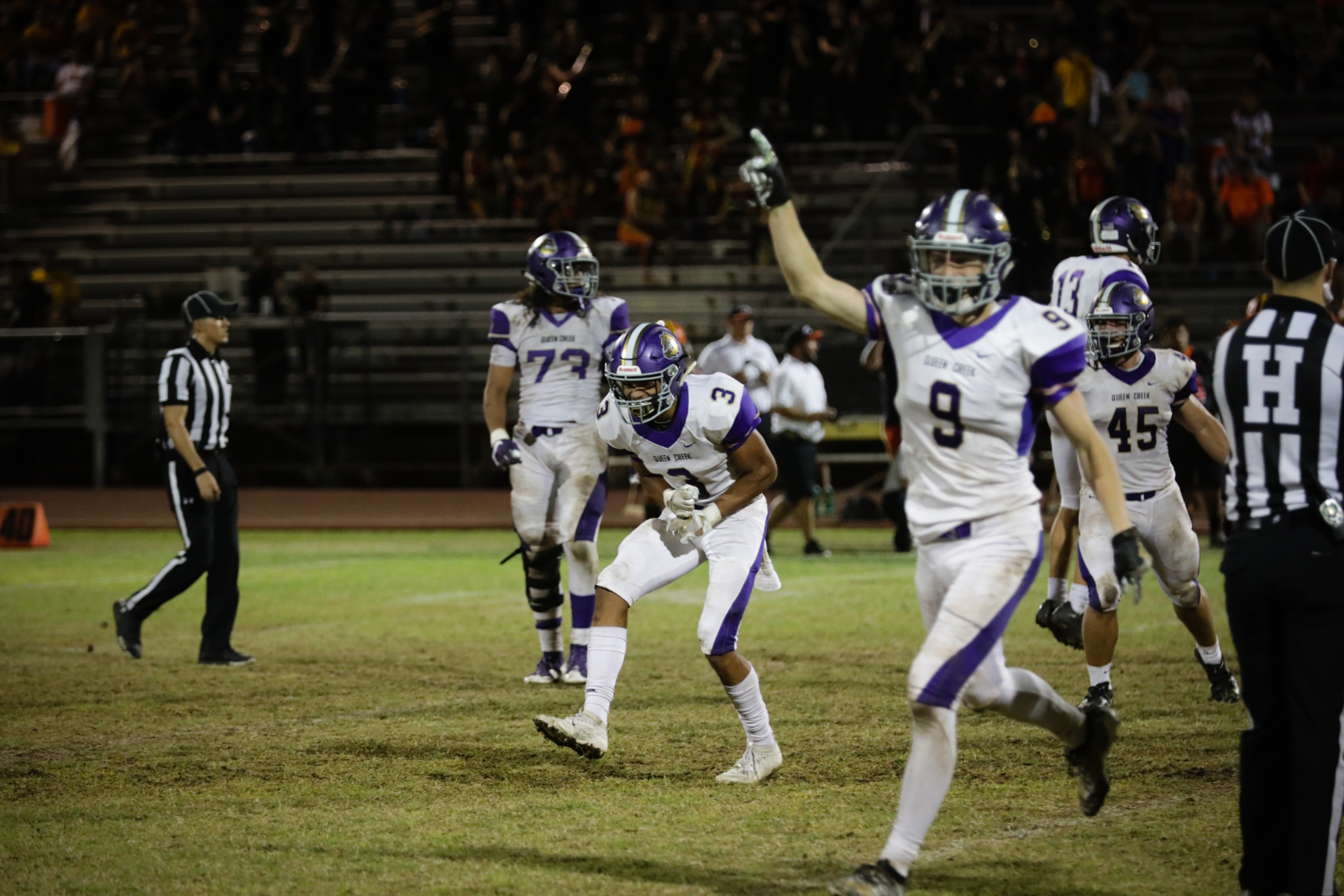 Queen Creek answered early in the second to tie up the game. The scoring drive was highlighted by a long pass and reception from senior quarterback Devin Brown to senior Trey Reynolds. After Reynold’s catch, senior running back Peyton Barlow had a 20 yard run that brought the Dogs inside the red zone. QC scored its first touchdown of the season on a Trey Reynold’s seven-yard rush with about eleven minutes to go until the half.
On Perry’s next drive, senior Hunter Barth intercepted the ball on the Perry 41-yard line to give the Bulldogs good field position. Brown and the QC offense took advantage with another connection to Barlow and then another run into the end zone from T. Reynolds. The Pumas then took advantage of some defensive miscues and penalties to tie the game up at 14 apiece.
On the ensuing kickoff, Larry Royal had a good return to set up the QC offense for another scoring drive. Brown made quick progress down the field with less than two minutes until the half, putting his team in great position to take the lead heading into the locker room. With just over two seconds left on the clock, Brown completed a five-yard pass to senior Colby Garvin for the score. Josh Ingram followed with his third PAT of the night to give the Bulldogs a 21-14 lead at the half.
Perry came out in the third quarter with a little more energy, outscoring Queen Creek 14-6. The Pumas had a missed PAT in the quarter, but made it up with a two-point conversion. QC’s lone touchdown in the third came following a 50+ yard return from senior Krew Jackson. Barlow followed with a 29-yard rushing touchdown to push the score to 27-28 headed into the fourth following a missed PAT.
Queen Creek started the fourth quarter with the ball, but Perry’s defense forced a punt just one minute in. The Puma offense looked poised to score on its next drive, taking time off the clock and pushing inside Queen Creek’s territory, but sophomore Porter Reynolds stood in the way. On an attempted running play, P. Reynolds stripped the ball out of the Perry runner’s hand and carried it all the way to the 19-yard line before being taken down with six minutes to go in the game.
QC pushed ahead and on a 3rd & 8, Brown found Garvin again in the end zone to give the Dogs the 33-28 lead. The Bulldogs went ahead and attempted the two-point conversion, which led to a rollout from Brown to rush in for the two extra points.
With under three minutes to go, the Dog defense stepped up again to seal the game and the season-opening victory.
QC will return to its home field on Friday, Oct. 9 for its region opener against Williams Field at 7 p.m.
Nov
19