QUEEN CREEK, Ariz.—As Queen Creek High School celebrates Veteran’s Day this year, we are proud to recognize two of our QCHS coaches who are currently serving in the Army.

Head baseball coach Mikel Moreno has been at QCHS for the past five years and has had great success as the Bulldog baseball coach. Moreno has missed two seasons while serving our country in the Army Reserves. He has six years of active duty service and has served five years in the Reserves and the Guard.

In his first season back from deployment, Moreno led the Bulldogs to the 5A San Tan Region Championship and was named the San Tan Region Coach of the Year. He was also named The Arizona Republic Coach of the Year in 2017. In 2018, the team made it to the state quarterfinals and finished with a record of 21-9. In 2020, Moreno’s team was on track to be a state championship contender, earning an undefeated record before being shut down due to the COVID pandemic.

Moreno’s journey to the military is an inspiring one and came later on in his life. Coming out of high school, he received service appointments to all three of the military schools. The service academies don’t give scholarships, but award what’s called an appointment. Moreno had decided to commit to West Point, but ended up ultimately choosing to play baseball at Arizona State University.

“I do not regret that decision, but I told myself I would honor my commitment to serve eventually,” said Moreno. “I enlisted when I was older and it has been a great experience.”

Balancing home life and civilian work life with the military has been a challenge, but Moreno is grateful for a supportive family.

“The balancing part of it is difficult,” said Moreno. “A loving and understanding wife has to deal with difficulties more than I do. It is not easy, but she allows me to go after my goals.”

Moreno acknowledged that he’s learned a lot from sports and has been able to use those lessons in the Army and vice versa.

“Sports have taught me more than the military,” said Moreno. “The teamwork, accountability, adaptability and physically fitness I learned from sports. These traits easily transitioned into the Army. However, my deployments have given me first-hand knowledge of the great citizens we have defending our country. These are remarkable people and I am humbled to have worked with them.”

He said the Army has helped to give him a perspective that helps him in his coaching.

“The Army has given me a better sense of awareness,” said Moreno. “So many times people say life or death, or let’s go to battle, or some other flippant war analogy. I tell our boys that baseball is important, but it is not the most important thing in life. Prepare and work hard. Once the contest is over, we get another try. In combat, some do not. So I want our players and families to have proper perspective.”

In the Army and in baseball, Moreno will continue to hold those around him to a high standard and give their best each day.

Head boys volleyball coach and Queen Creek High School security guard Jose Pacheco is also in the Army. Pacheco is new to the QCHS coaching staff. His first season with the boys volleyball team was in the spring of 2020. His team was only able to play a few games before the shut down. 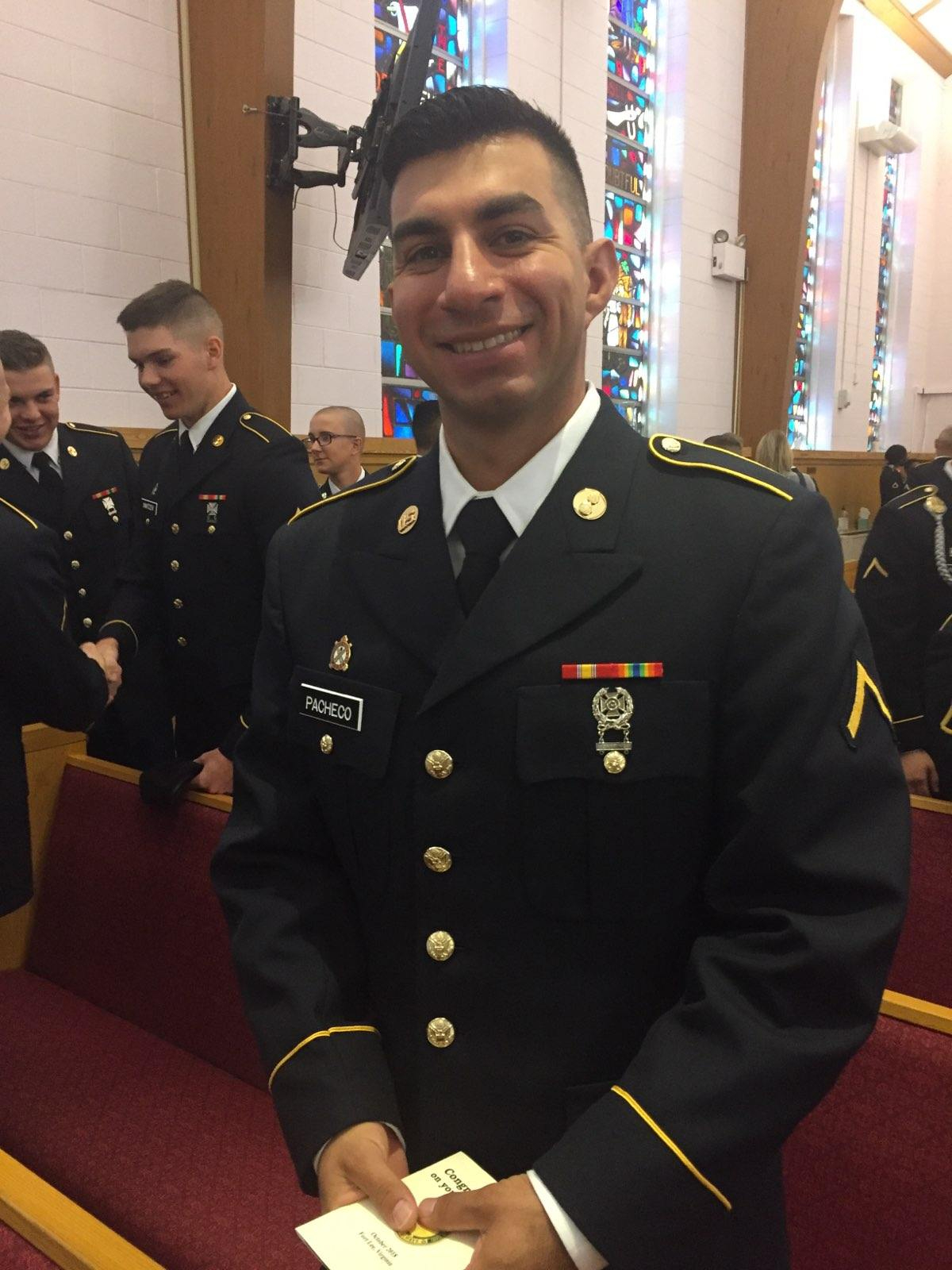 Pacheco also joined the military later on in life, enlisting in the Army National Guard in 2018 at the age of 30.

“My desire to serve had a few reasons, but one of my biggest was the chance to become a soldier and serve my country,” said Pacheco. “I also want to be an example to my boys and teach them about patriotism.”

Pacheco, like Moreno, says he couldn’t do it all without the support of his family.

“It is hard balancing life,” said Pacheco. “I am grateful to have an amazing wife, who stays home and raises our three boys. She supports me in every aspect of my life. Without her, I don’t think I would have joined or been able to do what I do. Also, for her and I, volleyball is life. We both coach and love volleyball and know the sacrifice. We just make it work. And when I don’t have anything else going on, I love playing with my boys.”

Pacheco didn’t have much time with the volleyball players last year, but in his upcoming seasons he hopes to teach his players to have respect for everyone around them.

“What I have learned in the military that has translated to coaching volleyball is showing these young men the meaning of responsibility, integrity and discipline,” said Pacheco. “It’s important to stand up for yourself and your actions and to put in effort and hard work to obtain the best results possible.”

We are beyond lucky to have Coach Moreno and Coach Pacheco on our coaching staff and appreciate their service to our country and our school. We are excited to see them coach their teams this spring in baseball and boys volleyball.