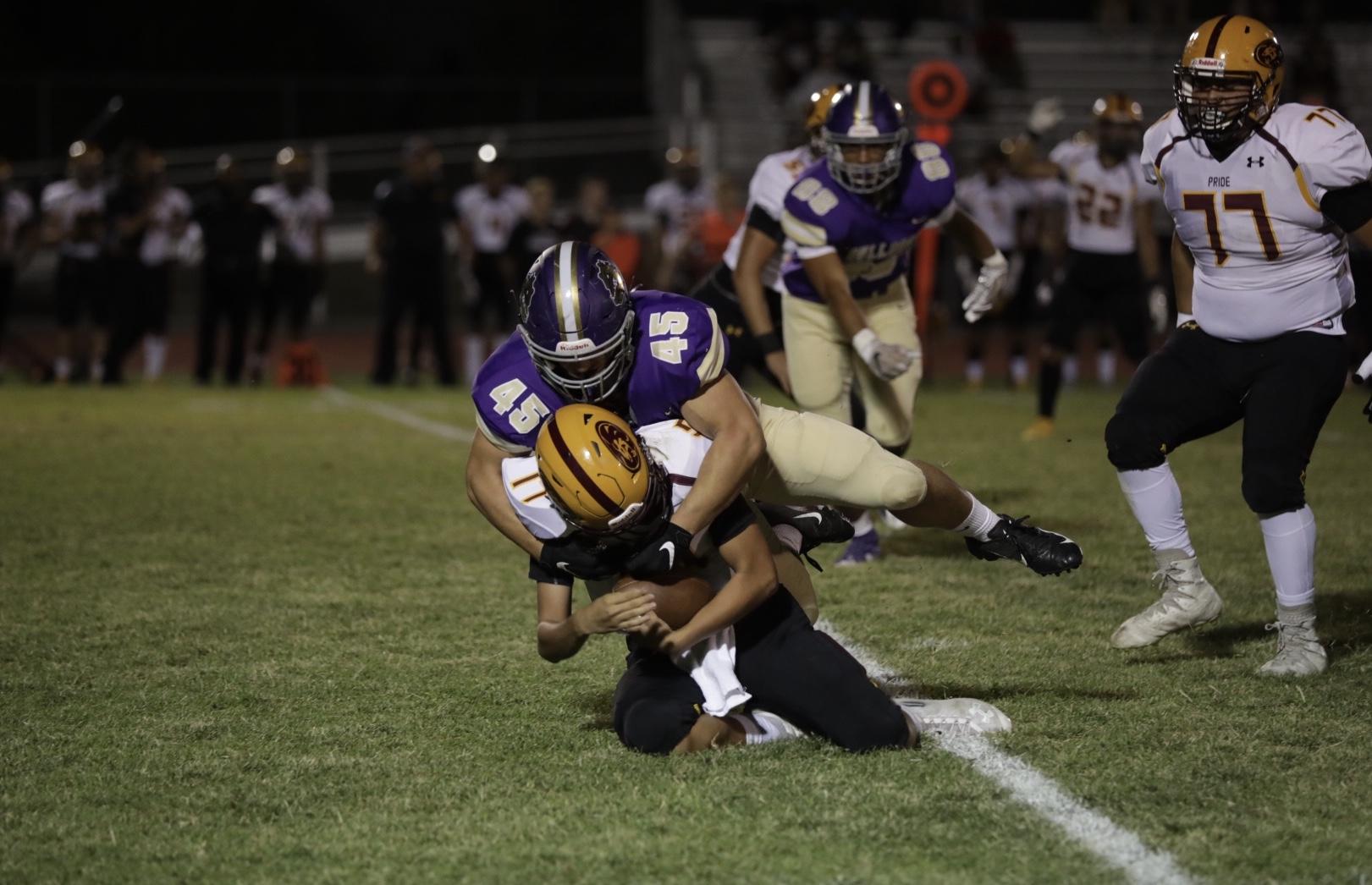 QUEEN CREEK, Ariz.–If Queen Creek football’s goal this week was to start region play off with a bang, they did that and more with a 32-0 shutout over Mountain Pointe at home on Friday night.

The game was the defense’s first shutout of the season and sported multiple 20+ yard touchdowns, a fumble recovery and a pick-six.

“I’m thrilled with how we played defense tonight,” said head coach Joe Germaine. “It was a struggle on offense tonight. They have a lot of talent over there on defense and for us to come out and put zero points on the board on defense, really that was the difference in the game.”

Queen Creek took a while to settle into the game on the offensive side of things. Up until tonight, the Bulldogs had shared quarterback responsibilities, but the five-game wait period for transfer junior Devin Brown was finally over.

He threw for two touchdowns in the first half, both of which were dimes. The first came on a slant play to Jared Bosworth, on QC’s opening drive. Bosworth caught the ball and ran it the rest of the way for a 45-yd TD.

The second touchdown of the first half came just a few minutes before halftime. QC started the drive on its own four-yard line, but took advantage of a 74-yd completion from Brown to Bosworth. Brown then threw a fantastic fade pass to receiver Colby Garvin, who solidified the 20-yard score with an even better catch.

In the second half, the Bulldog defense was determined to keep the Pride off the scoreboard. Mountain Pointe’s possessions in the half ended in two three and outs, a failed fourth down attempt, a pick-six and a fumble recovery.

Junior linebacker Trey Reynolds, who was able to focus solely on defense this week after handing over the quarterback duties, was proud of how the team played.

In its third touchdown of the night, Jace Bond scored on a 45-yard run that had Mountain Pointe scrambling. His touchdown was followed by a Payton Barlow pick-six and then just before the start of the 4th quarter a fumble recovery from Colby Littleton.

The Dog’s final score of the game came on a 27-yard field goal from Zane Kaupe, who also made all of his PAT’s. Queen Creek also added a two-point conversion into the mix, scoring on a run play from Jake Whittaker following Barlow’s pick-six.

Next week Queen Creek will travel to Corona del Sol and then will have a bye week before continuing region play at home against Desert Ridge on Oct. 18.